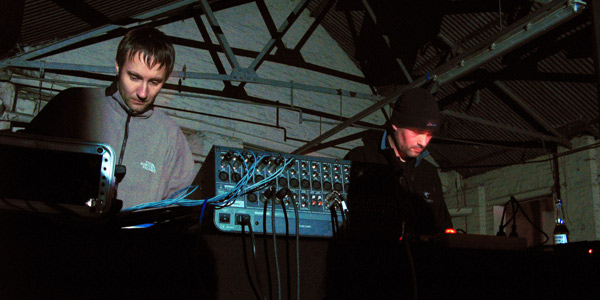 An interview with Sean Booth from Autechre just before the release of their 10th album for Warp entitled "Oversteps". The interview was conducted via phone from Manchester.

Last time I interviewed you was in a back of a pub in Kidderminster. As part of the toilet tour you did for ‘Tri Repetae’

Fucking hell. yeah. I remember that. That was a weird gig. It was in a biker’s pub or something. I remember afterwards the guy who owned it was really mad. He was repeatedly chucking this whisky bottle in the air and trying to smash it, but the bottle wouldn’t smash. It was like out of some weird American road movie.

I actually attended quite of few of those gigs on that tour. Venturing to parts of the UK i’d never want to visit again.

Yeah, it was an amazing thing to do actually. We were just getting known at that point and it was sort of like, we needed to do a tour so we thought, fuck it, we’ll do all the indie pubs. No one’s ever gonna do that, it’ll be totally weird and we’ll take a massive lighting rig with us. One gig we did in Ramsgate had a total of four people turning up. But that was ’95!

I don't really use the word career, I hear it used a lot and I shrug when I hear it. The word career isn’t incompatible with modern life. We’ve always had a long term plan with Autechre, but we don’t really have any specific goals.

Though I think artists nowadays do see it as a career. Especially due to the multi channel nature of it all.

Yeah, you’re right. There was kind of a cynicism that grew up during the 90’s. You had the club circuit people bringing up the new generation of young stars during the late 80’s. Production was limited to singing over awful backing tracks and churning out stuff on a production line. Then the KLF book came out, which was very cynically pointing this out. Then you had a generation of wiser producers who wanted to take this on board on a musical level. Cos no one likes mediocrity and being sold a shit idea, everyone wanted come out with fresh stuff. Which was nice for a bit. But nowadays, kids have grown up with X-Factor and all that shit. So it’s like gone full circle again, the club scene people running the show again. Kids thinking that they can sing and dance and make every single fucking genre of music, do you know what I mean? Its like taking away the personal element.

And kids are growing up now are thinking ‘Im being really expressive, I’m really in control of my life, I’ve got all these goals and agendas’. Whereas having that mindset is exactly the problem. The self image is being programmed externally. But, fuck it, whatever. (laughs).

I was scanning reviews of the new record ‘Oversteps’ and one word that seemed to crop up was ‘accessible’. Do you find it amusing that this characteristic is a welcome attribute to yr music?

God. Number of different concepts there that I struggle with daily. On the question of accessibility. It all depends on the person who’s accessing it. These concepts are kind of tricky. i wouldn’t say its abstract and I wouldn't say its accessible. It’s a purely personal standpoint and there’s a lot of subjectivity there.

People I’ve spoken to found this album more immediate than ‘Quaristice’. But I liked how that last album evolved over time with the versions that came out.

With Quaristice, cos we were capturing live sessions it was like diary entries. Cos we didnt have an agenda so each day we’d be doing totally different types of music. And we wanted to reflect this in the way the album evolved. The live sessions were like an hour long each and we’d edited it down to 7 minutes but then edited them again for the album. So the versions came out from the intermediate edits.

So on the ‘quadrange ep’ there’s like near hour long takes that are basically complete live sessions that are still slightly edited. We’ve still got really, really long unedited sessions of the lot of the tracks, like 90 minutes long. But we can’t put them out. (laughs)

Is there a plan or narrative for each new album?

Do you examine or listen to previous work and consciously come up with something different?

We’re bound to have certain aesthetic leanings and habits formed from things we like. We’re not too aware of how much we might repeat ourselves, when we work, its not like we’re creating things, its more like we’re finding them.

Moving away from Autechre, tell me more about your solo collaboration with Mika Vainio and Kouhei Matsunaga. Im surprised that either you or Rob don’t collaborate more.

We do sometimes, I mean I’ve done a few things with Aaron (Venetian Snares). Not doing it for any reason other than a laugh; just swapping files back and forth. We did a load of stuff with Zoviet France a few years ago, they’ve got the DATs, I still don’t have a copy of that. I’ve done half a track with Tom Jenkinson (Squarepusher) which is pretty mad, where I’m trying to get him to play bass at 60bpm (laughs)

Going back to the Mika / Kouhei thing, I’ve done a few things with him, but this is the first one that he talked about releasing. And the idea was that it was me, Kouhei and Mika all recording a track at the same time independently of each other and it was gonna be blended.

But when Kouhei got the parts together, him and Mika were saying that somehow, mine and Kouhei’s were quite compatible as was Mika’s and Kouhei’s but there was some slight incompatibility with me and Mika. Which I thought was quite cool. Kouhei also had the idea that there was some telepathic communication between us all. Hence the title of the record.

I thought all of his releases were great. The 12” and the collaboration album as well as his solo album.

That’s what he does, he basically forces people to collaborate with each other. And he’s good at it (laughs) All the mistakes on the album artwork are all part of the process too. He’s a really propulsive guy, he’s constantly making things happen. I think he’s an important figure at the moment, he’s bringing different people from different areas together in a way that I haven't seen for fucking ages.

That came about cos I had a lot of tunes lying about and I had some nice software that I wanted to try out.

So it was all done on computer?

What software was it?

Not telling you (laughs)

Noticed loads of hip-hop in there. BDP, Ultramagnetic MC’s.

Yeah, most of it is stuff from my youth. I played like three new tracks. I played a Terror Danjah track, just to tell people that I think he’s one of the best producers ever. Even though everyone sleeps on him nowadays, do you know what I mean? And yeah a couple of other little things, reminders of pure old school really.

I remember the shows you did on Illegal Broadcasting Corporation. What do you think of the current state of pirate radio. Do you listen to it?

I do. A little bit. I don’t mind, same as it ever was. It’s like kids playing tracks they like so that’s a good thing, I reckon.

It’s like its own project. We love it. Its not like playback, we make new material to play out. It’s kind of a separate strand, its grown into its own thing. And we want to engage with an audience that is into the sound, hence why we don’t engage visually.

Yeah, last time I saw you guys live was at the Hearn Street Car Park in Shoreditch with a pretty phenomenal sound system. Which reminded me of how crap most systems I hear in London are these days.

What about last decade, what would you say your experience was during the 90’s?

Memory partly clouded by age, but I’d say that I heard consistently better systems during the 90’s in London. There seems to be a dearth of decent venues in London and the good ones seem to be disappearing all the time. Recent examples include the threatened closure of iconic venue Plastic People by Hackney Council.

Yeah, that needs to stopped actually. Its a depressing state of affairs.

What contemporary stuff do you listen to?

Loved the last SND album, it was lush. I’m glad it exists. But mainly hip-hop really, ‘cos that’s what all my mates listen to. I tend to cruise other stuff. So much of it that it’s hard to keep up. I quite like on iTunes, these mid-tier compilations of old stuff. Where you can pick one track that you like, especially if you have it on vinyl and don’t wanna do an encode. Especially some of the old funk stuff, cos its interesting to hear it in a digital state. Its a bit of an education really.

Before we part, tell us about the ATP you curated in 2003.

We’d love to do it again, its just that you never end up with the ideal list, you always get the secondary choices.

Who wasn’t there that you would have liked?

Yeah, that’s better to ask, isn’t it! (laughs) Actually to be fair we did get a lot of fucking ace people, pretty much everyone on the bill were ones that we were massively chuffed to have. We tried to get Devo and Busta Rhymes, but couldnt get either. Earth didn’t show up which was a bit sad, but that was a passport problem.

My personal highlight was Bernard Parmegiani.

That was amazing, moreso that he was prepared to do it on that setup. Tod Dockstader would have been ace too, but he wouldn’t have done it. He’s dismissive of most modern music....and quite rightly too!