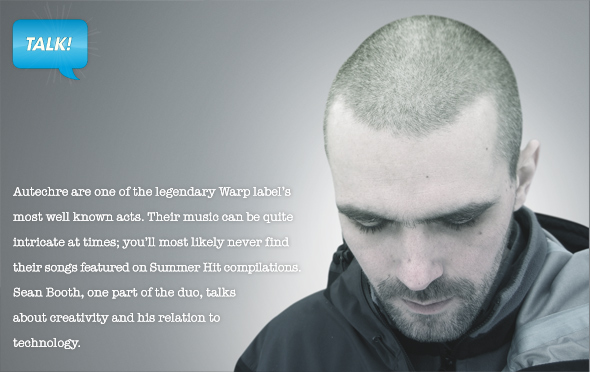 Autechre are one of the legendary Warp label’s most well known acts. Their music can be quite intricate at times; you’ll most likely never find their songs featured on Summer Hit compilations. Sean Booth, one part of the duo, talks about creativity and his relation to technology.

What are you up to at the moment? I hear a lot of noises in the background.
In the studio working on bits of our live set. Fine tuning. We’re using the Elektron SPS-1UW and SFX-60 alongside a Nord modular G2 and an Akai MPC1000, with a bitstream controller. It is a similar setup to what we used to use back in 1993, but slicker basically and a lot more capable. We used laptops for a while, between 1996 and 2002, and we had tons of crashes. Home made sequencers we would modify on the road and which would always be pretty buggy as a result of that didn’t help. There were other factors obviously: OS and driver updates, club conditions, heat and humidity.

Oh. Did everything go completely silent on stage?
A few times, yeah. Some nights we would have backup in the form of a bunch of sounds on a Minidisc player shuffling randomly, but you could only get away with it for a couple of minutes before people started shouting.

Regarding composing, do you feel that your choice of instrument or program affects the musical outcome?
Absolutely. Interface has an influence, but more so the range of parameters available. Whatever machine or software we use provides a space to work in; it has a feel that’s its own, more so with hardware. Different kinds of instruments and sequencers will encourage you to work in a different way. If you for example use a tracker as a sequencer your tracks might reflect that in un-obvious ways. A Roland MC202 is mental really, that sequencer still spins me out. Same with the Roland R8, doing melodies with an R8 is ace. I like the way different people respond to machines, I like witnessing that dialogue between a person and a machine or a range of possibilities. There’s something naturally interesting about it.

What are you specifically looking for in a music instrument?
Sound usually, but it varies. Instrument is a tricky definition because it can mean anything. I’m sure to a lot of people the way we use sequencers make them sound like instruments, I’m not even sure I know what isn’t an instrument, do you know what I mean? I like those grey areas, when you come up with sounds you didn’t think were possible. That is one thing I like about the Elektron gear. You haven’t many options really. When you look at the manual for example you think, ok yeah, a range of techniques I’m familiar with or whatever, but hearing it is essential. You managed to put in just the right parameters and the algorithms are lush. That FM thing on the Monomachine is ridiculous, the way the envelopes work is really pared down and usable. Well considered. Powerful but simple.

While we’re at it, what is your general opinion about the sound of our gear?
Incredibly lush sound. Digital but warm, deep and very open ended. The Machinedrum has bass, it really delivers. I've made some of the lushest kick drums on it; they really cut through a rig in a live situation. The physical modelling in the Machinedrum is really odd and unique I think. Very useable, way better than the standard set you hear everywhere. I’m also having a lot of fun with the RAM machines in the Machinedrum UserWave. Done tons of stuff with them and I still see loads of potential for new applications. The Machinedrum is also the tightest sequencer we've got in here. Apart from trackers and our Atari :) On the Monomachine I’m well into the drum sounds. Odd choice, I know but they’re dope. A really tasty selection. There’re too many other things to mention, if I get too specific I'd be here all day literally. I think people should play on these things because that’s the only way you can have any idea. Extremely capable machines and we're still finding stuff to do in there after two years of heavy use.